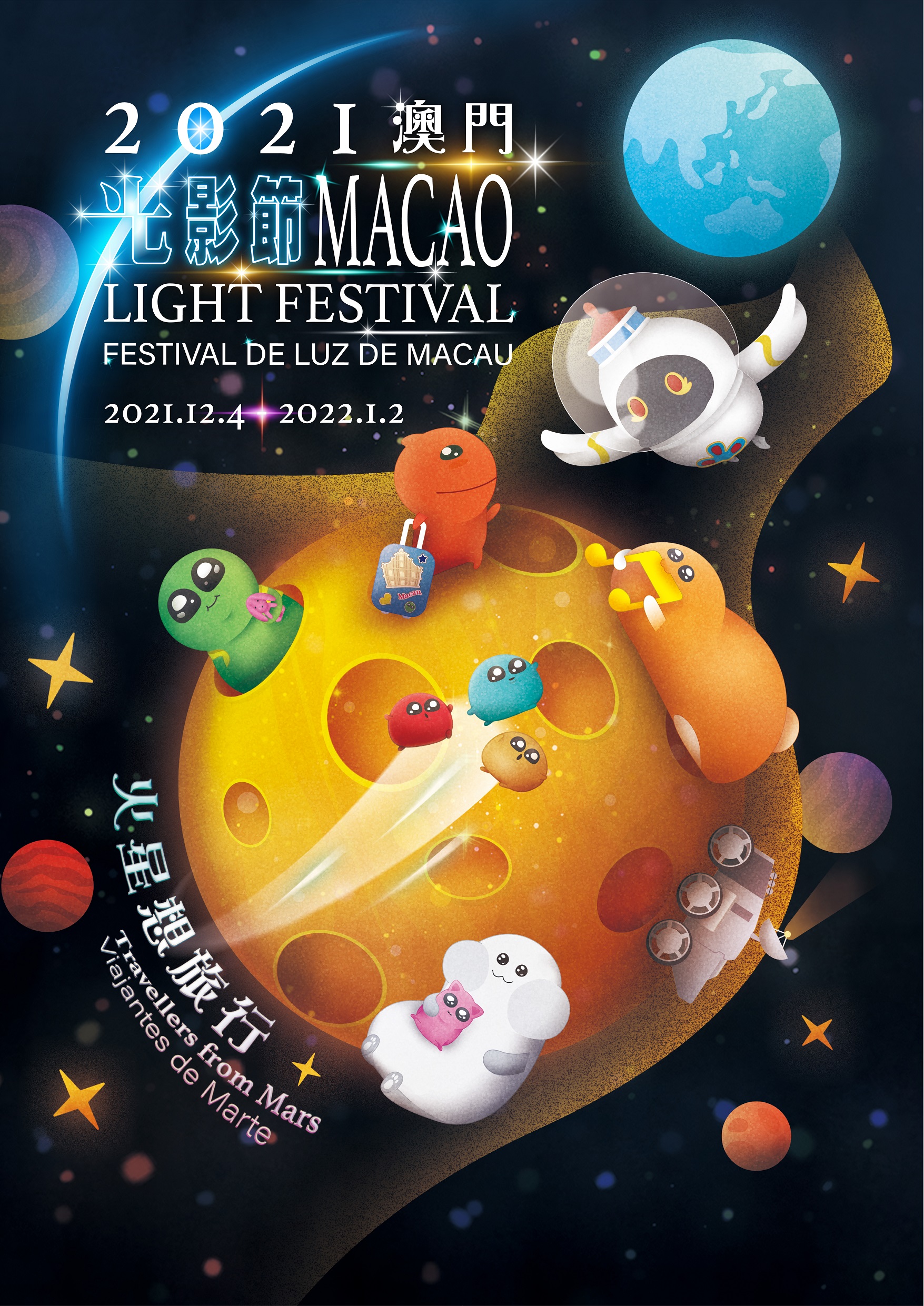 Macao, 24 November 2021 – Organized by Macao Government Tourism Office (MGTO), “Macao Light Festival 2021 – Travellers from Mars” will light up different communities across Macao Peninsula, Taipa and Coloane with light installations, interactive games and projection mapping shows from 4 December 2021 to 2 January 2022, weaving together “tourism + culture and creativity” for economic revival in communities, and filling the festive holidays with sparkling memories for residents and visitors.

Sparkling extravaganza to begin on 4 December

In the press conference held on 18 November 2021, MGTO Director Maria Helena de Senna Fernandes expressed that the Macao Light Festival will once again illuminate local communities, weaving together “tourism + culture and creativity” to widen the choice of nighttime entertainment and enrich the offer of travel experience. The event is anticipated to lead more visitors into different communities for sightseeing and spending, create more economic benefits for local businesses, and foster the nighttime and community economy. She added that the Macao Light Festival is scheduled to unfold this December just as most of the past editions and dazzle the city until 2 January 2022. The event period will cover many festive holidays including the Anniversary of the Establishment of the Macao SAR, winter solstice, Christmas, New Year’s Eve and New Year’s Day. What’s more, the Macao Light Festival will be unveiled on 4 December concurrently with the Light up Macao Drone Gala, another extravaganza newly presented by MGTO, in the hope of attracting more travellers to Macao for a memorable festive vacation.

Held for the seventh year, the Macao Light Festival will take place from 7 p.m. to 10 p.m. from 4 December 2021 until 2 January 2022 (the last projection mapping show will start at 9:50 p.m. per night). The Festival carries the theme of “Travellers from Mars” to radiate sparkling joy and positive vibes for residents and visitors while highlighting Macao’s profile as a healthy and quality travel destination.

Sprawling across different local streets and lanes, the Macao Light Festival will illuminate new locations such as Macao Science Center and Barra Pier, offering a captivating experience to enjoy as night falls. The event is expected to entice residents and visitors into different communities for sightseeing and spending, benefit small- and medium-sized enterprises (SMEs) and inject new impetus into the nighttime and community economy. What’s more, the Light up Macao Drone Gala will adorn the night sky every Saturday and on the Anniversary of the Establishment of the Macao SAR this December at Nam Van Lake as well, joining the Macao Light Festival to offer wonderful spectacles of light and sound.

The Macao Light Festival will cover locations as follows:

“Macao Light Festival 2021 – Travellers from Mars” will be a radiant confluence of light installations, interactive games and projection mapping shows. There will be four different projection mapping shows presented by performance teams from Macao, Hengqin, Changsha and Tokyo, alongside fun games to give away themed gifts in special design. The event incorporates elements of tourism, culture and creativity, not just to manifest Macao’s image as a unique destination with diverse travel experience to offer, but also to propel the concerted development between tourism and the cultural and creative industries, and deepen cross-sector integration of “tourism +”.

Four projection mapping shows will dazzle upon different unique architectures and travel attractions. Macao Science Center will become a new place to experience projection mapping in the city, while project mapping will dazzle the Chapel of St. Francis Xavier in Coloane as a new show venue of the Festival this year. MGTO once staged mapping shows at the Chapel of St. Francis Xavier and other locations in celebration of the 15th Anniversary of the Establishment of the Macao SAR in 2014. Largo do Pagode do Bazar at the Central District and Largo dos Bombeiros in Taipa, on the other hand, had both served as mapping show venues in the past editions of the Macao Light Festival.

The projection mapping shows revolve around Macao’s history, culture and dynamic as a UNESCO Creative City of Gastronomy as part of the themes:

Online and on-site games in exchange for gifts

After playing the online game on the website of Macao Light Festival 2021 (mlf.macaotourism.gov.mo/index_en.html), taking a screenshot for share on social media and completing the instructions, participants can present the pertinent proof at any of the gift redemption counters for Macao Light Festival 2021 to obtain themed gifts. Spectators can also enjoy the interactive games on site and share the photos in exchange for the themed gifts. All gifts are available in limited quantity on a first-come, first-served basis.

A range of pandemic prevention measures are adopted for Macao Light Festival 2021. Entrances and exits will be set up for the designated areas for the Festival with implementation of crowd management measures. According to the actual situation on site, audience can line up for admission and are required to present their Macao Health Code in green color, undergo temperature checks and maintain at least one-meter social distance, in addition to wearing masks throughout the time on site. MGTO will closely monitor the pandemic situation and rigorously comply with Health Bureau’s pertinent guidelines to make prompt arrangements in accord.

MGTO is organizing the Macao Light Festival for the seventh year in a row since the inaugural edition in 2015. The Office will forge ahead to deepen cross-sector integration of “tourism +”, strengthen interactive development of tourism and other related industries, promote tourism diversification and innovation, as well as steer the community tourism and economy forward. In the future, MGTO will continue to present a diversity of spectacular events and activities to enrich travellers’ experience in Macao.