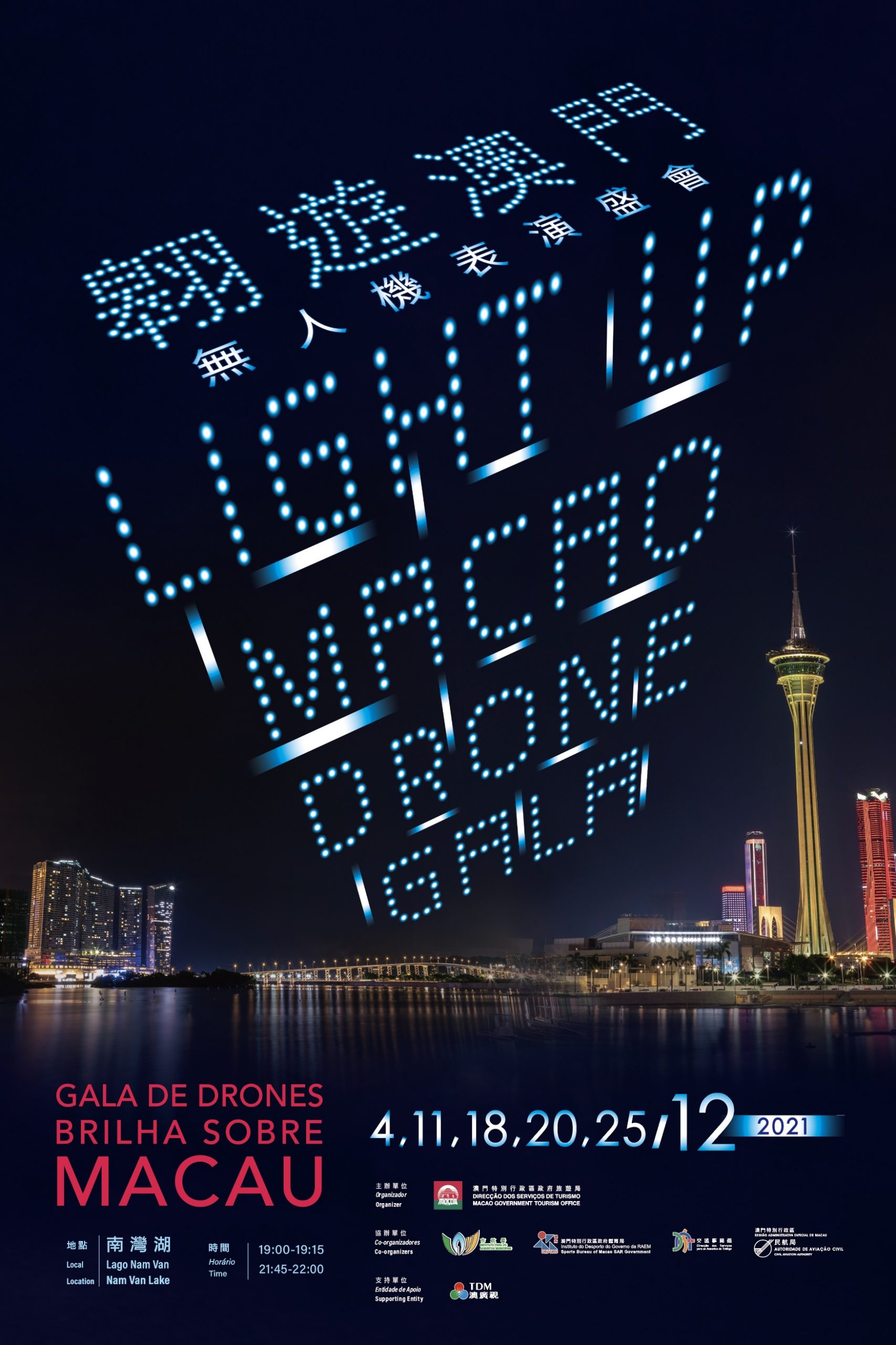 Macao, 12 November 2021 – As a new event organized by Macao Government Tourism Office (MGTO), the “Light up Macao Drone Gala” will dazzle the city concurrently with the Macao Light Festival 2021 in December. There will be ten sessions of drone shows at Nam Van Lake at 19:00 and 21:45 per night on 4, 11, 18, 20 and 25 December. Drone shows under different themes are scheduled for each of the five evenings while the same themed show will be staged for two sessions per night. Residents and visitors can go to Nam Van Lake area and Anim’Arte NAM VAN to enjoy the shows at their preferred time slots. 300 drones will light up the sky during each show which lasts for 10 to 15 minutes.

Newly introduced drone shows to deepen “tourism +” cross-sector integration
Under the vast impact of the COVID-19 pandemic, Macao as well as various countries and regions have adopted travel controls and preventive measures. Pyrotechnic teams from worldwide hence could not come to Macao for the Fireworks Contest. Cancelled last year, the Macao International Fireworks Display Contest is once again beyond reach this year. MGTO therefore ventures upon a brand-new project — “Light up Macao Drone Gala”. Owing to the earlier pandemic situation, the “Light up Macao Drone Gala” is rescheduled to unfold in December. With the Anniversary of the Establishment of the Macao Special Administrative Region and Christmas on the way, the drone shows are also reinvented to manifest corresponding new themes, to fill this festive season with more sparkling delight for residents and visitors to savor.

Like fireworks shows, the “Light up Macao Drone Gala” is a visual art extravaganza that takes place upon the canopy of the night sky. It orchestrates a symphony of technology, integrated 2D and 3D design, light and sound effects, resembling a constellation of stars which adorn the city’s night skyline. The Gala will conjure nighttime entertainment experience fresh for the eyes of residents and visitors, deepening integration across sectors of “tourism +”.

Performance teams of professional companies
With drone technology advancing in recent years, drone shows have become a kind of widely popular performances nowadays. Professional drone teams from the Mainland demonstrate fine standards in their artistry of drone shows. After taking into consideration different drone formation shows in the past, five teams from Shenzhen, Tianjin, Guangzhou and Beijing are invited to dazzle Macao’s night sky with drone formation shows for the Gala. Boasting rich experience in drone show creation, the invited teams have staged drone shows at different major occasions including performances for the Mainland’s App of Yangshipin, Countdown of Asian Games and China Media Group Spring Festival Gala among others. Three of the teams  even set world records for the longest drone flight time and for most drones flying simultaneously.

Five themes manifest festive, tourism and cultural hues
Themed as “Drone Gala ‧ Macao Light Festival”, “Charm of Macao”, “Embrace your Journey in Macao”, “Macao Lotus in Full Bloom” and “Christmas in Macao”, the shows of the “Light up Macao Drone Gala” will merge technology, humanities and arts while manifesting Macao’s festive aroma and mesmerizing cityscape as a safe and quality destination, as well as integration across various sectors of tourism, culture, festivals and sports. What’s more, the shows are set to embody the friendship and exchange between Macao and other Mainland cities. The drone shows will be choreographed in sync with music and narration, which will be played from loudspeakers installed at the lakeside pavements along Avenida Panorâmica do Lago Nam Van spanning from Anim’Arte NAM VAN to the vicinity of the great white canopy, bringing the effect and ambience to a new level for spectators to enjoy the shows with both visual and auditory entertainment.

Strict compliance with pandemic prevention Free choice of time slots for staggered admission Live broadcast on TV channels
Upon admission to the designated audience area from Anim’Arte NAM VAN to the vicinity of the great white canopy, spectators are required to present their green Health Code and undergo temperature checks, as well as to maintain at least one-meter social distance and wear masks throughout the time on site. As each show will be staged twice per night, audience can enjoy the shows at their preferred time slots, enabling staggered admission to minimize overcrowding. Audience can also enjoy the shows’ live broadcast on TDM – Macao TV Channel (21:45 every show night) and TDM Entertainment TV Channel (19:00 and 21:45 every show night) with the synchronized music streaming from TDM - Radio Macao's Chinese Channel (FM100.7) every scheduled evening.

Adverse weather contingency plan
The function/performance and communication channel of drones are subject to variations in wind speed and rainfall rate. The shows can take place under suitable conditions at the wind speed of 31 – 40 km/hour or below without any rainfall. MGTO will consider the weather forecast of the Macao Meteorological and Geophysical Bureau and assess the actual situation. If the situation requires postponement or cancellation of the shows, the Office will seek to announce the news to the public two hours before the show if possible.

MGTO will continue to deepen cross-sector integration of “tourism +”, joining hands with different sectors to steer Macao’s tourism industry towards diversification, innovation and sustainable development. The Office will present a great diversity of events and activities in the future to enrich travelers’ experience in Macao.