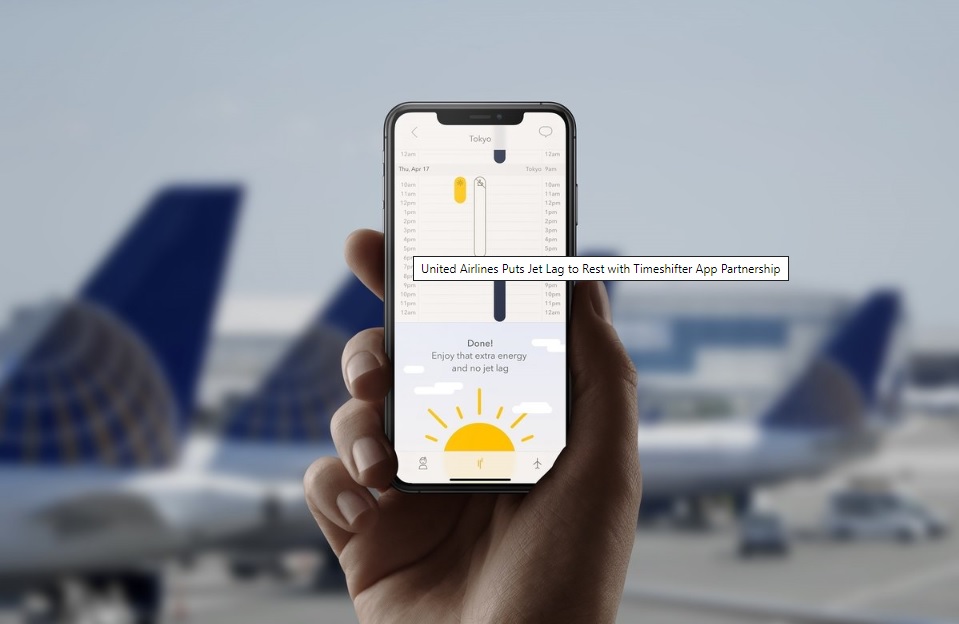 United Airlines customers now have a new, scientific way to battle jet lag through a first-of-its-kind partnership with Timeshifter, an app that outlines the best time to see and avoid light, sleep and enjoy caffeine to adjust quickly to a new time zone.

Starting today, all MileagePlus members receive access to a free Timeshifter jet lag plan and Premier 1K members receive a complimentary subscription with unlimited plans. The app is targeted at customers flying across three or more time zones and will be a helpful tool for them to manage their jet lag as they travel throughout United's global route network.

"We want to do everything we can to help improve the experience of traveling across time zones, whether it's a business trip to Tel Aviv or a vacation to Tahiti, our customers should arrive feeling fresh and ready to hit the ground running," said Vice President of Loyalty and President of MileagePlus, Luc Bondar. "Timeshifter takes all the guesswork out of avoiding jet lag and instead uses science and algorithms to design a customized, step-by-step trip across time zones. I was a believer the first time I used the app and I think our customers will love it too."

Timeshifter was developed by top researchers in sleep and circadian neuroscience and is aimed at customers crossing three or more time zones. The app uses an algorithm to customize plans for customers based on a number of factors including normal sleep pattern, flight details and individual preferences, creating a personalized jet lag alleviation plan. Each plan includes:

MileagePlus members will receive a free jet lag plan for a flight plan of their choosing in addition to the complimentary trial Timeshifter offers customers for a total of two free flight plans. MileagePlus Premier 1K members will be able to sign up for complimentary annual subscriptions for unlimited access to jet lag plans when they travel. Individual plans for the app retail at $9.99 for a round trip plan and yearly memberships are $24.99.

United's partnership with Timeshifter is an additional step in improving the travel experience for MileagePlus members. Earlier this year, United announced that MileagePlus miles no longer expire and partnered with CLEAR to provide members with free or deeply discounted memberships to help make travel easier and more predictable.

United flies some of the longest routes in the world, including the two longest flights operated by a U.S. carrier with non-stop service between Houston and Sydney and between San Francisco and Singapore. In December, United will become the only airline to fly direct from North America to Cape Town, South Africa with the start of brand-new service from New York/Newark. United flies 320 routes to 120 international destinations from the U.S.