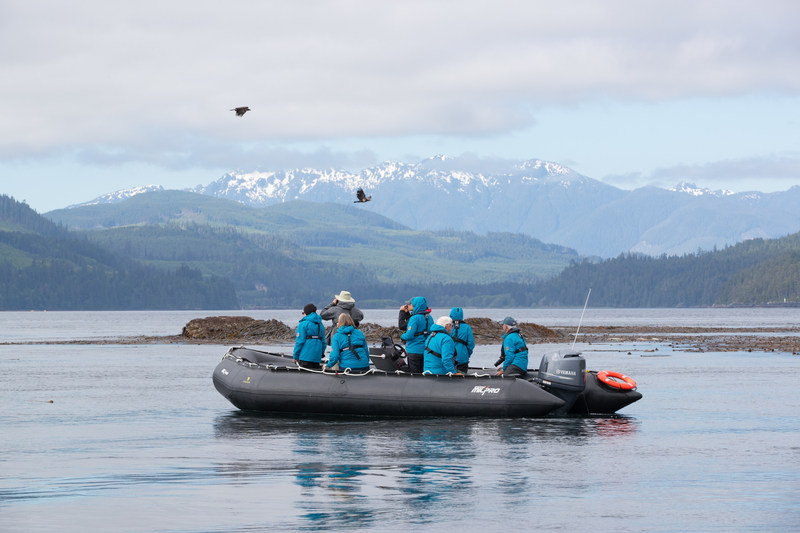 Seabourn, the world’s finest ultra-luxury cruise line, is ensuring that its 2019 season in Alaska & British Columbia unfolds as an immersive experience and stands out with an impressive offering of optional Ventures by Seabourn guided kayak, Zodiac, catamaran and hiking tours led by a highly accomplished, skilled, and knowledgeable Seabourn expedition team.

The already-assembled expedition team includes experienced wilderness experts, scientists, historians and Zodiac operators. Ventures by Seabourn excursions are available for-charge, in select destinations, and can be booked in advance by guests. In addition, the expedition team will couple with several local tour operators to enhance hiking excursions, bringing additional wealth of local expertise and information on the region to guests.

“As every year, we are excited to share our experienced and qualified expedition team for the upcoming 2019 season in Alaska & British Columbia. The strength of the group lies in the combination of academic passion, old-school experience, and local knowledge that they bring to the cruise schedule,” said Robin West, vice president of Expedition Operations for Seabourn. “This season’s expedition team will not only join the guests on Ventures outings, but will add to the on board experience of Seabourn Sojourn with complimentary lectures on their fields of expertise including marine biology, geology, ornithology and history. They’ll further be available at every turn to point out wildlife, join guests for dinner, and answer questions around the ship about the wild and pristine wonders that draw them – and our guests – back year after year.”

Also part of the Seabourn Conversations program, the expedition team members regularly interact with guests throughout each sailing, sharing keen insight and in-depth knowledge about the history, ecology and culture of the region. Their valuable insights are offered both in complimentary formal presentations on a variety of topics and in more casual conversations over meals or at leisure. In addition, the team chronicles their adventures with stories and photos via Seabourn’s Ventures Tracker.

Travelers considering a trip to Alaska & British Columbia in 2019 have extra incentive to book now with Seabourn offering a complementary “Veranda for Ocean-View” upgrade on all sailings to the destination. The offer, which is valid through February 13, 2019 as part of the Signature Savings Event, provides the value of a guaranteed veranda suite for the price of an ocean-view.

Guests can look forward to participating in up-close explorations of the majestic beauty and fascinating history and culture of America’s Last Frontier. Ventures by Seabourn will be a highlight of an exciting schedule of 11-, 12- and 14-day ultimate Alaska itineraries on board Seabourn Sojourn scheduled from June to October 2019.

Members of the handpicked expedition team for Seabourn’s 2019 season in Alaska & British Columbia include:

The expedition team will rotate throughout the season, and additional team members will join select sailings periodically.

Seabourn Sojourn’s 2019 season in Alaska & British Columbia provides ultra-luxury comforts together with on board programming including Seabourn Conversations, a complimentary enrichment lecture and presentation series, and wildlife watching on deck. The unique voyages combine Alaska’s most popular ports with rarely visited hidden gems of the Inside Passage and British Columbia, including destinations such as Alert Bay and Klemtu.