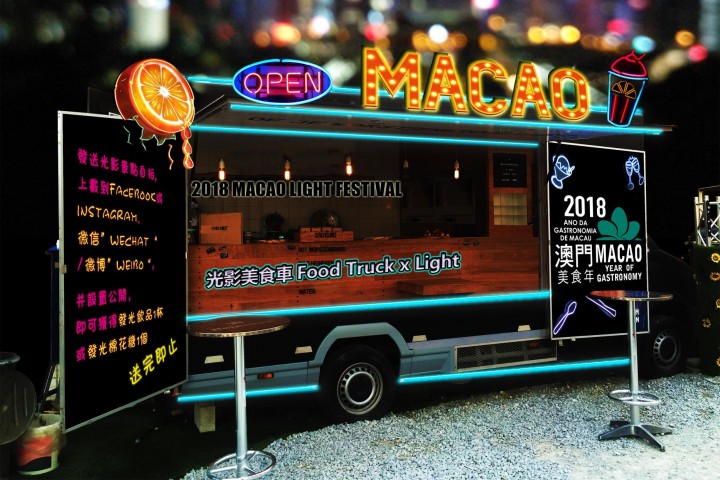 The 'Macao Light Festival 2018 - Time Travel in Macao' will glamorously unfold in various locations around Macao from 2nd to 31st December. The Macao Light Festival will feature mapping shows created by local and overseas teams, light installations and interactive games plus an array of new highlights such as Food Truck x Light and Gastronomy Night Market, a virtual reality (VR) game as well as Cultural and Creative Night Market, among others. The route will connect a string of new locations to welcome visitors to various neighborhoods.

Revolving around the concept of time, the Festival will not only manifest the city's East-meets-West culture but portray nostalgic stories and childhood memories of Macao people, leading spectators on a glittering journey across time and space in Macao.

Five mapping shows will be projected in three locations, besides an itinerant projection show in Taipa Municipal Market. Three mapping shows produced by their respective teams from Portugal, Belgium and Macao will dazzle the Ruins of St. Paul's throughout different periods.

Two other mapping shows have been meticulously created by local production entities: In 'Flashing Macao' at St. Dominic's Church, the Macao Tourism Mascot 'MAK MAK' will lead the audience to travel back in time to old Macao before returning to the present and venturing into the city of the future; 'Search for the Taste of Memory' in the square in front of Pak Tai Temple will open the eyes of the audience to local dining culture and habits throughout different decades, thereby manifesting the preservation and renovation of the gastronomic culture of Macao as a Creative City of Gastronomy; the itinerant projection show in the Taipa Municipal Market, 'Taste Buds Surprise', will showcase the diverse cuisines of Macao in a splendid feast.

Launched for the first time, 'Food Truck x Light' will offer illuminated drinks and souvenirs for redemption. The public can complete various designated activities in exchange for illuminated drinks and souvenirs from food trucks parked in three locations. Meanwhile, Gastronomy Night Market features local signature delights in the square in front of Pak Tai Temple as another new highlight. Information stations will be set up along the three routes to provide information about the Light Festival and offer souvenirs for redemption.

Residents and visitors can take photos with the Macao Tourism Mascot 'MAK MAK', who will appear along the three routes in a total of 14 image styles around the theme of Christmas, chef and gastronomy. Welcoming residents and visitors to join, one of the activities requires participants to look for 'MAK MAK' along the routes, take pictures with it and complete the required steps in exchange for souvenirs.

The event will bring forth an array of interactive games and light installations designed to enchant the audience and enhance their participation. 'Nostalgic Hopscotch' in Largo do Pagode do Bazar will enable Festival-goers to relive their childhood fun in Macao by hopping across dazzling checkers. 'Future Mailbox' in Calçada da Igreja de S. Lázaro will encourage people to express their heart to themselves and others in the future on the big screen via the Macao Light Festival 2018 mobile app.

'Fly over Macao．VR Experience' in Nam Van Lake Nautical Centre will give participants their first virtual reality experience in the Macao Light Festival whereby participants can soar above Macao and enjoy a panoramically scenic flight by putting on VR goggles and robotic arm.

Other illuminations and interactive installations include 'Space-time Hot Air Balloons' floating across Nam Van Lake Nautical Centre and 'Wall of Times', which will give an introduction to the transformation of culinary culture in Macao in Taipa Houses, delivering the essence of creative gastronomy.

The Macao Light Festival will feature its first Cultural and Creative Night Market in Anim'Arte NAM VAN, the local hub for culture, creativity and leisure. In addition, an Outdoor Local Concert will be staged on Fridays, Saturdays and Sundays, creating exchange opportunities and showing Macao's cultural and creative industries to visitors from around the world.

The 'Macao Light Festival 2018 - Time Travel in Macao' will be staged from 7:00pm to 10:00pm from 2nd to 31st December (the last projection mapping show will start at 9:50pm daily, while the light installations in Anim'Arte NAM VAN will be illuminated until 00:10 on 31st December). The public can download the mobile app on App Store or Google Play for free when the Festival arrives, and also obtain information about the Festival via the Macao Government Tourism Office's (MGTO) official WeChat ID or the pages about the Macao Light Festival 2018 on Facebook, Instagram and Weibo, as well as visiting MGTO's official website: www.macaotourism.gov.mo.