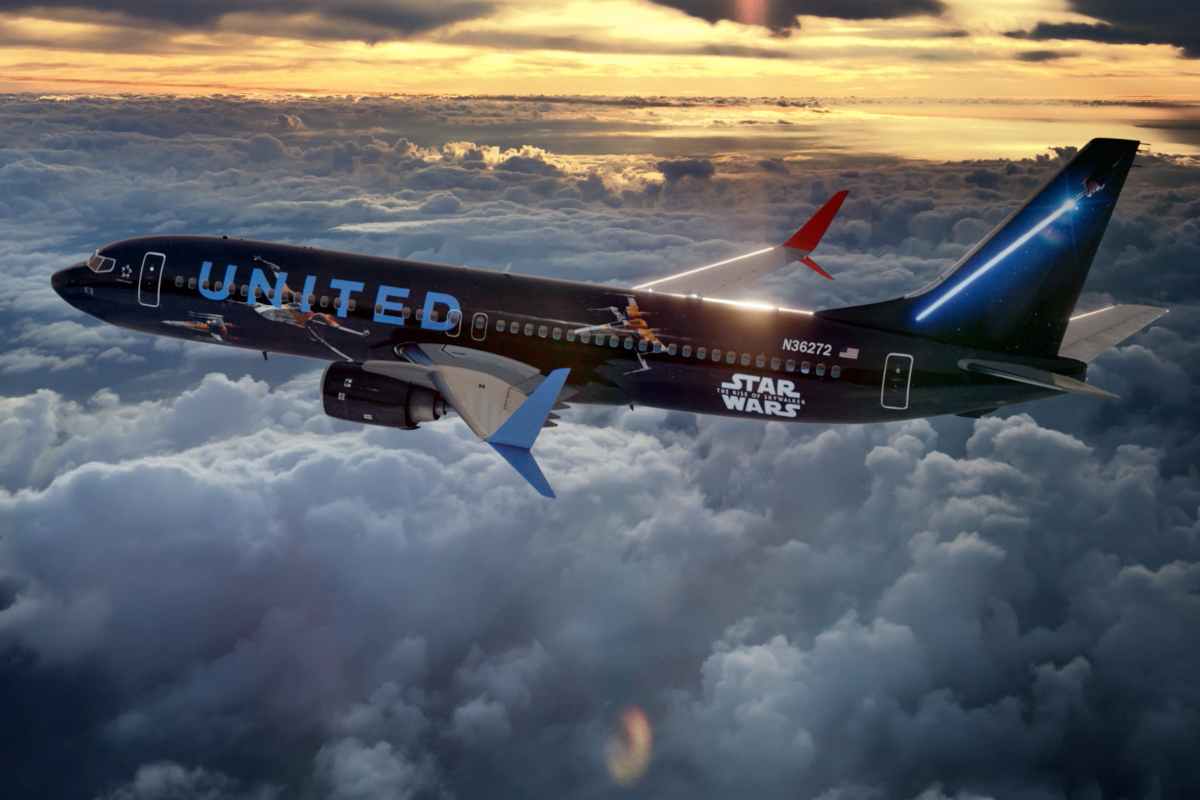 CHICAGO, Oct. 25, 2019 /PRNewswire/ -- United Airlines today announced that the carrier has teamed up with Star Wars: The Rise of Skywalker – the epic conclusion of the Skywalker saga, to offer customers and employees alike exciting opportunities in the coming weeks to experience the Star Wars saga first-hand on the ground, in the air and throughout the airline's galaxy.

Customers will begin flying the friendly galaxy in November when United officially unveils an all-new Star Wars-themed paint design on one of its Boeing 737-800 aircraft with a re-designed onboard experience to celebrate the movie. The airline will also offer Star Wars: The Rise of Skywalker-themed amenity kits and launch its latest inflight safety demonstration video featuring characters from the new film. In addition, the airline will provide once-in-a-lifetime opportunities for MileagePlus members – including access to attend the US premiere of Star Wars: The Rise of Skywalker – through MileagePlus Exclusives, the airline's platform that lets MileagePlus members use miles to bid and buy exclusive items and experiences.

"United Airlines and the Star Wars franchise share a common goal: connect people and unite the world," said Mark Krolick, United's vice president of marketing. "We are thrilled to join forces and help promote the concluding chapter of the Skywalker story, while at the same time enlisting help from our new friends from the Star Wars universe to demonstrate the importance of safety for our customers and colleagues."

United and Star Wars take to the skies

Next month, United will officially introduce into service a special Star Wars-themed Boeing 737-800 aircraft featuring the Star Wars: The Rise of Skywalker-themed paint livery and onboard experience. The new paint design, which the airline teased last spring on its social media channels, captures the exotic atmosphere of the Star Wars galaxy and features imagery of famous Star Wars spacecraft, including the X-wing and TIE fighter starships. The aircraft's tail starkly displays a different colored lightsaber – the weapon of the Jedi – against a black backdrop on each side, reflecting the two sides of the Force.

United will greet customers with classic Star Wars-themed music during the boarding process and distribute commemorative pins throughout December in celebration of the movie's premiere. The aircraft's interior will also feature a special plaque reflecting United's relationship with Star Wars: The Rise of Skywalker and include headrests affixed with the emblems of the film's dueling factions, the Resistance and the First Order. 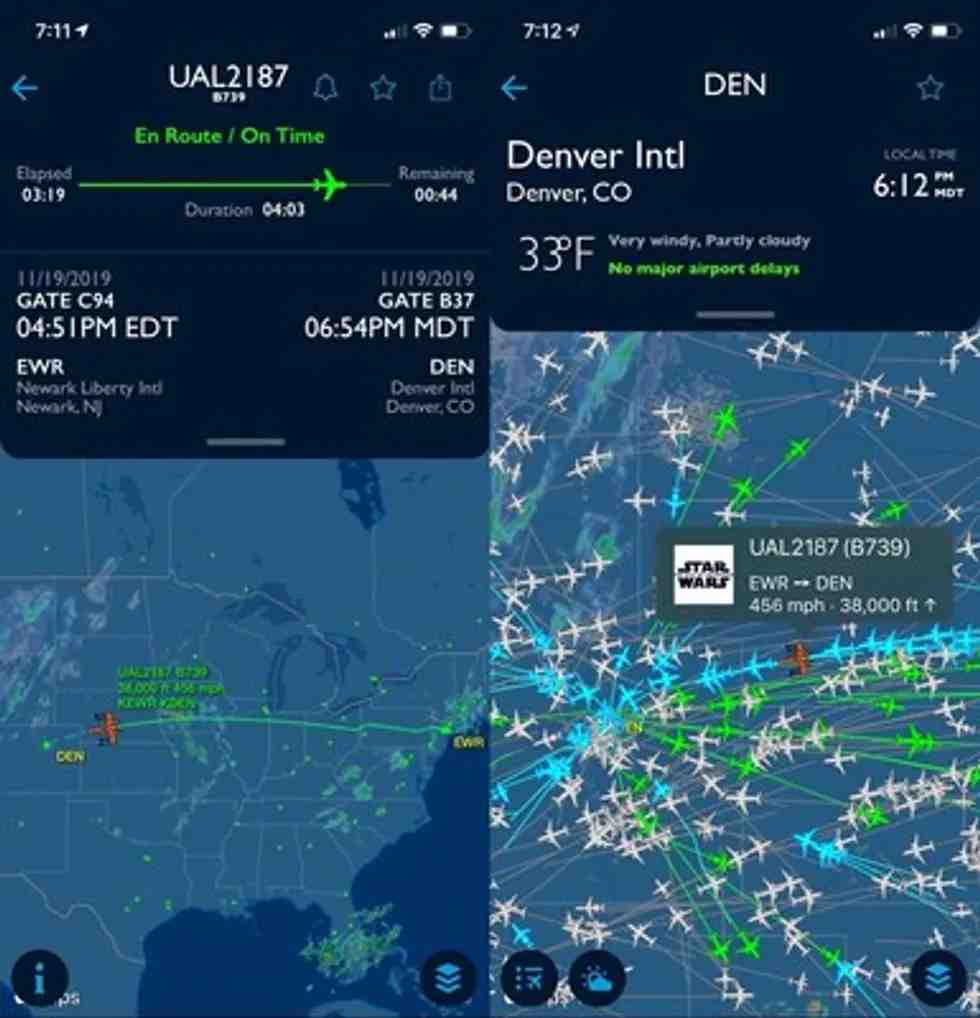 While not everyone will have the chance to see the new livery in person, anyone will be able to track United's Star Wars: The Rise of Skywalker-themed aircraft via special icon on FlightAware, the world's largest online flight tracking platform. For the first time, aviation and Star Wars enthusiasts can track past and future flights on both desktop and mobile by entering the plane's tail number and the new livery will appear on FlightAware's flight tracking maps as the X-Wing starship.

Safety is our highest priority

The new inflight safety demonstration video highlights United's lasting commitment to the safety of all the airline's customers and employees traveling to places "far, far away." In addition to United employees providing safety instructions on what do to in the unlikely event of an emergency, the video features special appearances by several iconic Star Wars characters and thrilling, space-themed sequences scored to some of the most recognizable musical themes in both motion picture and commercial aviation history. The safety video also highlights some of the many international destinations United serves within the airline's galaxy. To view the safety video, please visit: united.com/starwars.

Beginning today, on MileagePlus Exclusives, members will be able to bid award miles on several unique Star Wars experiences including:

United's shared purpose is "Connecting People. Uniting the World." We are more focused than ever on our commitment to customers through a series of innovations and improvements designed to help build a great experience: Every customer. Every flight. Every day. Together, United and United Express operate approximately 4,900 flights a day to 358 airports across five continents. In 2018, United and United Express operated more than 1.7 million flights carrying more than 158 million customers. United is proud to have the world's most comprehensive route network, including U.S. mainland hubs in Chicago, Denver, Houston, Los Angeles, New York/Newark, San Francisco and Washington, D.C. United operates 788 mainline aircraft and the airline's United Express partners operate 560 regional aircraft. United is a founding member of Star Alliance, which provides service to 195 countries via 26 member airlines. For more information, visit united.com, follow @United on Twitter and Instagram or connect on Facebook. The common stock of United's parent, United Airlines Holdings, Inc., is traded on the Nasdaq under the symbol "UAL".

About Star Wars: The Rise of Skywalker

Lucasfilm and director J.J. Abrams join forces once again to take viewers on an epic journey to a galaxy far, far away with Star Wars: The Rise of Skywalker, the riveting conclusion of the seminal Skywalker saga, where new legends will be born and the final battle for freedom is yet to come.

Miles, awards and benefits are subject to the rules of the United MileagePlus program. For details, see www.united.com. For details relating to United's MileagePlus Exclusives see https://exclusives.mileageplus.com/Home/Terms