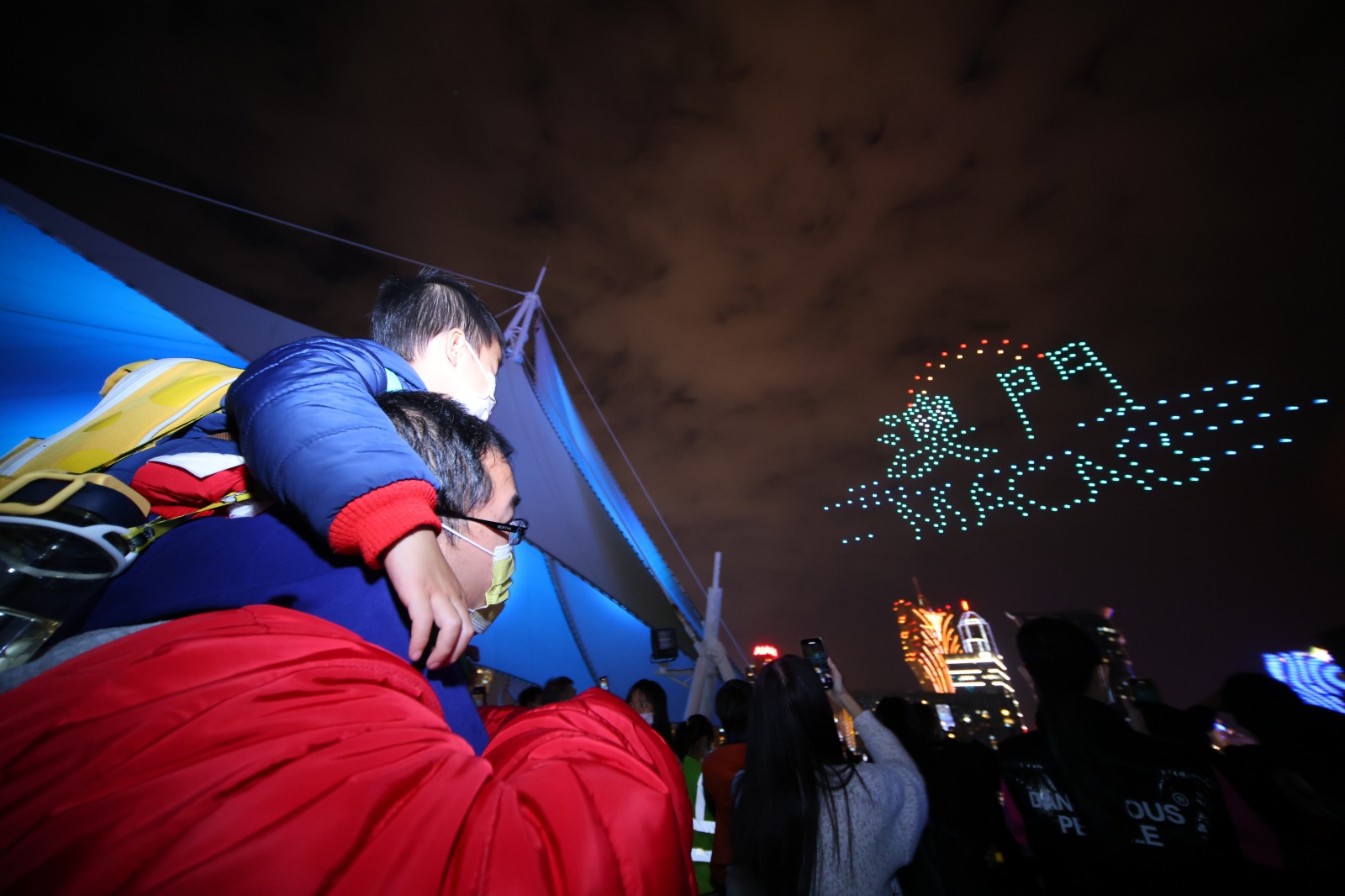 Macao, 7 December 2021 – Curtains were lifted upon the Light up Macao Drone Gala at Nam Van Lake on 4 December as a brand-new extravaganza organized by Macao Government Tourism Office (MGTO). After attending the kick-off ceremony of the Macao Light Festival 2021 and the Light up Macao Drone Gala at the seaside next to Macao Science Center, various guests headed to Nam Van Lake Nautical Centre to watch the first drone show. 300 drones dazzled across the night sky, symbolizing the vibrant splendor of Macao.

The first drone show which unveiled the Gala was presented by a creative team from Shenzhen. Themed as “Drone Gala ‧ Macao Light Festival”, the show marshaled a fleet of 300 drones to dazzle the cityscape, symbolizing Macao’s vibrant splendor. Upon the night sky, the drones formed a variety of sparkling patterns imbued with Macao’s characteristic elements such as lotus, World Heritage architectures and Macao Tourism Mascot MAK MAK, to share the love of Macao with spectators. Depicting a space rocket flying to Mars, the drone show also resonated with the theme “Travellers from Mars” of Macao Light Festival 2021 and highlighted Macao’s image as a safe and glamorous destination. The guests joined the public to enjoy the show on site and get immersed in the jolly ambience woven by both final mega events in December.

More drone shows to come into the limelight

Following the debut shows, more drone shows of the Light up Macao Drone Gala will ensue above Nam Van Lake at 19:00 and 21:45 per night on 11, 18, 20 and 25 December, to fill the weekends of this festive month with sparkling delight for residents and visitors, as well as in celebration of the Anniversary of the Establishment of the Macao SAR and Christmas. The drone shows are choreographed in sync with music and narration streaming from loudspeakers installed at the lakeside pavements along Avenida Panorâmica do Lago Nam Van spanning from Anim’Arte NAM VAN to the vicinity of the great white canopy, for spectators to enjoy wondrous spectacles of light and sound with enhanced effect and ambience.

The Light up Macao Drone Gala is a visual art extravaganza that takes place upon the canopy of the night sky. It orchestrates a symphony of technology, integrated 2D and 3D design, light and sound effects, resembling a constellation of stars that adorn the city’s skyline. The Gala conjures a fresh nighttime entertainment experience for the eyes of residents and visitors, deepening integration across the sectors of “tourism +”.

Upon admission to the designated audience area from Anim’Arte NAM VAN to the vicinity of the great white canopy, spectators are required to present their green Health Code and undergo temperature checks, as well as to maintain at least one-meter social distance and wear masks throughout the time on site. Venue code is also posted on site for spectators to scan through the mobile app of Macao Health Code for itinerary record. As each show will be staged twice each night, audience can enjoy the shows at their preferred time slots, enabling staggered admission to minimize overcrowding. Audience can also enjoy the relevant broadcast of the shows on TDM – Macao TV Channel (21:45 every show night) and TDM Entertainment TV Channel (19:00 and 21:45 every show night) with the synchronized music streaming from
TDM - Radio Macao's Chinese Channel (FM100.7) every scheduled evening.

The function/performance and communication channel of drones are subject to variations in wind speed and rainfall rate. The shows can take place under suitable conditions at the wind speed of 31 – 40 km/hour or below without rainfall. MGTO will consider the weather forecast of the Macao Meteorological and Geophysical Bureau and assess the actual situation. If the situation requires postponement or cancellation of the shows due to weather conditions, technical issues or other influences, the Office will announce the news to the public as soon as possible.

MGTO will continue to deepen cross-sector integration of “tourism +”, joining hands with different sectors to steer Macao’s tourism industry towards diversification, innovation and sustainable development. The Office will present a great diversity of events and activities in the future to enrich travelers’ experience in Macao.