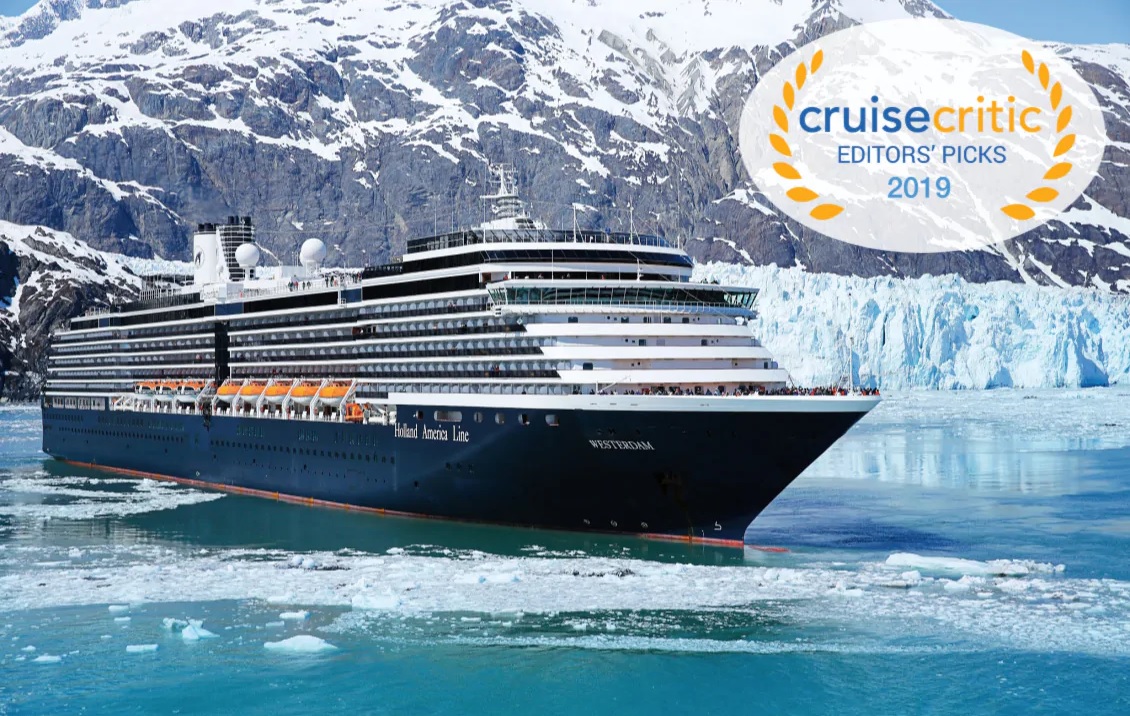 Cruise Critic, the world's largest cruise reviews site and online cruise community, announced the winners in its 2019 Editors’ Picks Awards in the United States and Australia. Holland America Line’s excellence was recognized in three categories: Best Dining and Best Itineraries in the United States awards and Best Entertainment in the Australian awards.

The Cruise Critic Editors’ Picks Awards highlight the best cruise lines of the year across dozens of categories, as chosen by the site’s international team of editors. In 2019 Cruise Critic celebrates the 12th year of bestowing the honors.

“Itineraries, dining and entertainment are the cornerstones of the Holland America Line experience, so being recognized by the editors of Cruise Critic as the best in these areas is a tremendous honor,” said Orlando Ashford, president of Holland America Line. “Over the past few years we’ve added many new and innovative concepts to our dining and beverage offerings, and our entertainment features the best live music at sea. And we’ve always been known for our unique itineraries and global destination expertise, particularly in Alaska where we’ve been taking travelers for more than 70 years.

“The editors of Cruise Critic are among the most knowledgeable and respected in the industry, and these awards tell us that what we’re doing at Holland America Line is resonating not only with our guests but also with experts who know cruising best.”

As a leader in premium cruising, Holland America Line’s fleet of 14 ships offers more than 500 cruises to more than 400 ports in 98 countries around the world. From shorter getaways to 128-day itineraries, the company’s cruises visit all seven continents.

Highlights in 2020 include a robust Alaska season of award-winning cruises on eight ships that offer the most options to visit Glacier Bay National Park. A breadth of options range from seven-day cruises on Koningsdam, the line’s newest class of ship, to in-depth explorations, smaller ports and Zodiac tours on 14-day itineraries by Maasdam. Land+Sea Journeys combine a cruise with an overland tour into Alaska’s interior to explore Denali National Park & Preserve or combine Denali with the Yukon Territory in an exclusive option only by Holland America Line.

Fleetwide, the ships feature innovative initiatives and a diverse range of enriching experiences focused on bringing the destinations to life on board. The best live music at sea fills each evening at venues including Lincoln Center Stage, B.B. King’s Blues Club, Rolling Stone Rock Room and Billboard Onboard. The award-winning dining experience can be savored at a variety of restaurants and specialty dining venues with menus that feature selections from Holland America Line's esteemed Culinary Council, comprised of seven world-renowned chefs.

Following are the awards with descriptions by Cruise Critic for each.

“Holland America not only covers serious territory at sea, traversing popular ports in the Caribbean, Europe and Canada/New England, but it's also constantly adding bucket-list trips. In addition to the line's Grand Voyages, circumnavigations and world cruises throughout Africa, Asia and Australia, Holland America has debuted its In-Depth Voyages — sailings that explore remote destinations, like Papua New Guinea — with expedition-style immersion.”