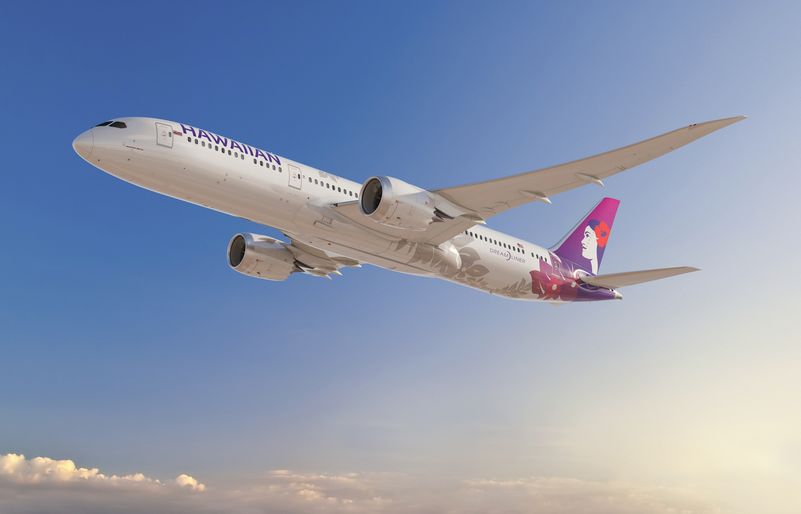 The first of 10 aircraft expected to arrive in 2021

HONOLULU – Hawaiian Airlines has executed a non-binding Letter of Intent (LOI) for the purchase of 10 Boeing 787-9 aircraft with purchase rights for an additional 10 aircraft, the airline announced today. The first fuel-efficient, lightweight, passenger-friendly “Dreamliner” is scheduled to arrive in the first quarter of 2021. Hawaiian has selected the General Electric GEnx engine to power the additions to its fleet.

“We were in the enviable position of choosing between two outstanding models for our flagship aircraft of the future and I couldn’t be more excited about the prospect of adding the Dreamliner to Hawaiian’s fleet,” remarked Ingram.

“Hawaiian Airlines has been on an impressive growth trajectory, continuously expanding service between Asia and North America. It’s why we are thrilled they’ve chosen to reach their next horizon with the 787 Dreamliner,” said Boeing Commercial Airplanes President and CEO Kevin McAllister. “The Dreamliner’s advanced technology, unmatched fuel efficiency, and passenger-pleasing cabin will help Hawaiian optimize its fleet for the future and provide their customers with a best-in-class experience.”

Hawaiian expects to finalize binding purchase agreements with Boeing and GE in the second quarter of this year. The company will also begin negotiating inclusion of the new aircraft in its contracts with the Air Line Pilots Association and the Association of Flight Attendants, which is required prior to final approval of the purchase by the company’s Board of Directors.

“The Dreamliner combines excellent comfort for our guests with fantastic operational performance and will allow us to continue modernizing our fleet into the next decade,” said Hawaiian Airlines President and CEO Peter Ingram. “It has more seating capacity than Hawaiian’s current wide-body fleet, which will allow us to further build upon our successful growth in Asia."