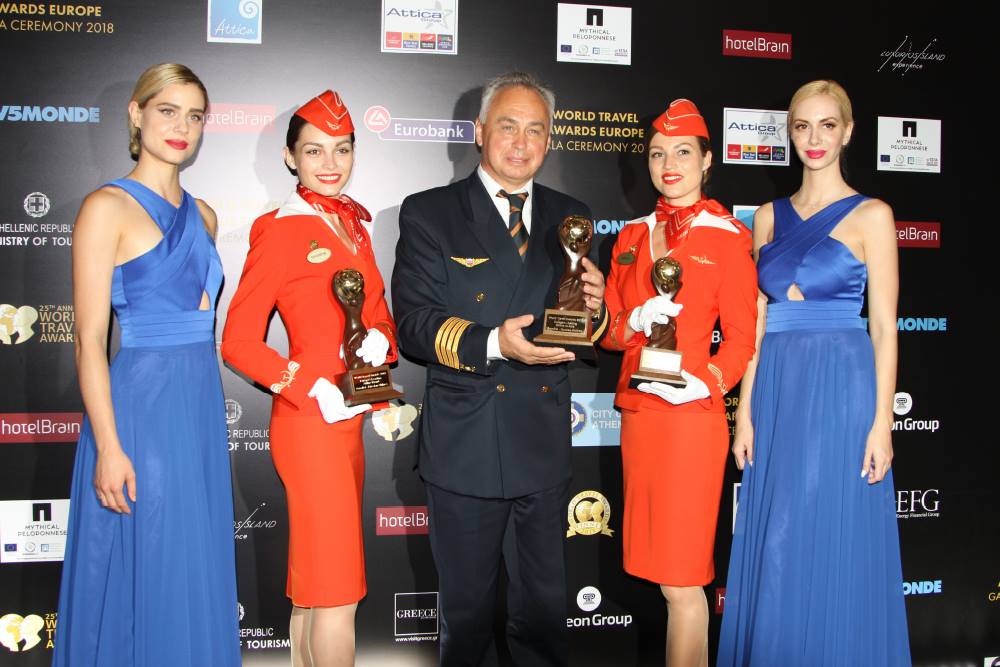 Known unofficially as the Oscars of the tourism industry, the World Travel Awards for Europe took place on 30 June at the Zappeion Megaron Hall in Athens, one of the main attractions in the Greek capital.

The World Travel Awards honour leading representatives of the travel, hospitality and civil aviation industries. Throughout the year, prizes are awarded on a regional, national and global level. Winners are determined via online voting, with hundreds of thousands of professionals and millions of travellers taking part. The main criteria for evaluation are product quality and level of service.

The World Travel Award for Europe’s Leading Airline was established last year and was immediately awarded to Aeroflot, which took the prize again this year. This confirms the position of Russia’s flag carrier as a leading global airline in terms of quality of service and the degree of comfort afforded by its business class.

In addition, Aeroflot received recognition as the leading airline for transit between Europe and Asia. In the battle for the title as the leading European airline on this transcontinental route, considered among the most competitive in global aviation, Aeroflot has eclipsed one of the most influential global air carriers, British Airways.

Aeroflot CEO Aeroflot Vitaly Saveliev commented: “Our victory in three prestigious categories in the World Travel Awards is a remarkable result, and a confirmation of our position amongst the elite of the global industry. We are proud of all the prizes that we have received, and particularly of the new title of Europe’s Leading Airline to Asia. Transit between Europe and Asia is one of the most free and competitive routes in the air travel market. You can only win in this category if you have powerful potential and a strong will, as there is no external support. Further development of this market will continue to be one of the main drivers of growth for Aeroflot. We are making the world more accessible for Russians. But Russia, her economic potential, cultural values and natural beauty are now also more open and accessible for the whole world.”

It is not the first time this year that Aeroflot has confirmed its position as one of Europe’s leading airlines. The carrier was recognised as the leading European airline for the second year in a row by users of TripAdvisor, the largest travel site worldwide. Based on the opinions of TripAdvisor users, Aeroflot received the TripAdvisor Travellers’ Choice Award as the leading major airline in Europe, and in a further three categories: Travellers’ Choice Award Premium Economy in Europe, Best Business Class in Europe and Best Airline in Russia.